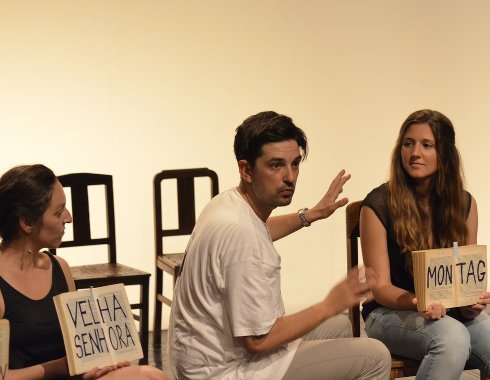 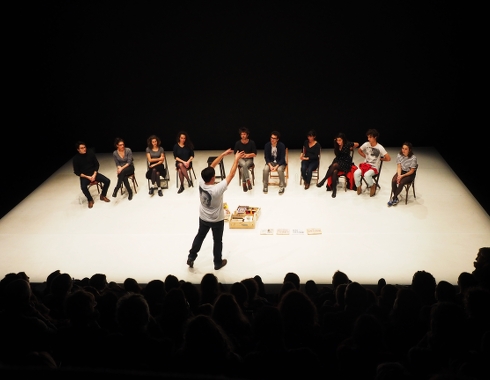 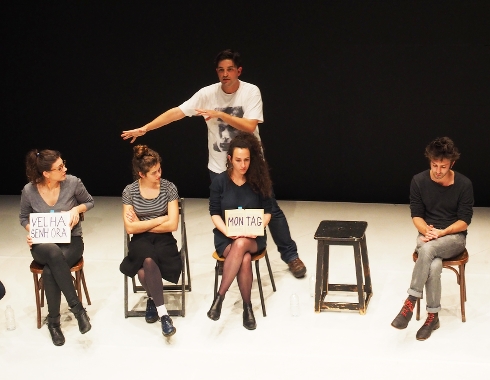 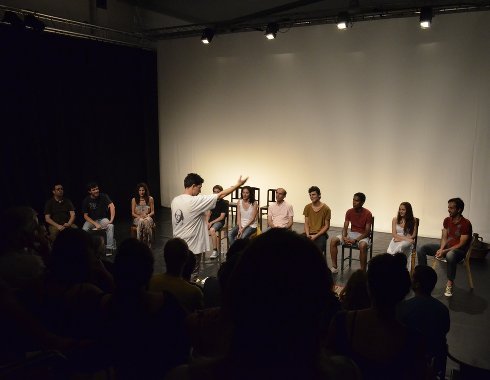 Tiago Rodrigues, a trained actor, the author of most of the plays he directs, the founder of the "Mundo Perfeito" ("perfect world") theatre group, the new director of the National Theater D.Maria II in Lisbon, in short, a man who seems to be capable of everything, stands alone on stage with ten chairs. With him, a box of books and a heart full of stories. He tells the stories of his grandmother, Candida, of Boris Pasternak and the firefighter from FAHRENHEIT 451 with infectious charm. They all believed in the resistance of art, in the value of poem learned by heart, a poem that no one can take away from you. And since Tiago Rodrigues also knows this value, a workgroup of ten volunteers will come together for the "March Unit Sonnet No. 30 by Shakespeare" and learn a poem together as a declaration of war against forgetting, disappearance and the passage of time.

Although Tiago Rodrigues does not speak German, he has learned the German version of the poem so that he can share it with the audience for the performances in Hanover. He is really capable of everything.

Sponsored by the Portuguese Embassy Berlin

Power to the imagination

These were the very first words - from a letter by Georg Büchner to his parents in 1833 - I heard Tiago Rodrigues say on a stage. It was the summer of 1997, theater director Jorge Silva Melo had invited our company STAN to the Centro Cultural de Belém (CCB), in Lisbon, for a series of performances and an extensive workshop with about 25 young Portuguese theater makers. Everyone and everything was young at that time: the CCB had existed for about five years, STAN hardly eight, Jorge wasn’t even fifty. Tiago, twenty-one years old (the same age as Büchner when he wrote the letter in question) was the youngest of us all.He was still at the conservatory, probably didn’t have the technical baggage of some of his older colleagues, but he stood there on that stage of the Black Box and pronounced Büchner’s words with so much clarity, authenticity, and intelligence that there was no way around him. It would be the beginning of a long-lasting romance with STAN. Tiago would co-create seven or so performances with the Flemish company (besides a few cameo-appearances in others). But that’s a different story.

Summer again, now 2006. Tiago Rodrigues has asked me to collaborate on URGÊNCIAS 2006, the second edition of a project at Teatro Maria Matos, in Lisbon, beginning with a number of new short theater texts by a dozen Portuguese playwrights, a pool of actors, and a question: ‘What do you have so urgently to say?’.

Mundo Perfeito had been founded three years before, and URGÊNCIAS is the first crystallization of the company that will, over the following years, claim a crucial place in the theater landscape in Portugal and beyond: centered around actor/director/writer Tiago Rodrigues and manager/producer/photographer/many-other-things Magda Bizarro, it generates very diverse but always innovative work that reconciles the contemporary with the accessible, thoroughness with humor. At a dazzling rate (33 productions in 11 years!) Mundo Perfeito develops projects that often start with the writing of a new text. The result is a vast and astonishing repertoire, driven by the urgency to bring a number of burning questions to discussion. The succession of the Mundo Perfeito productions also reads as a learning process, reflecting an insatiable curiosity and a profound belief in the humanist ‘homo universalis’, the image of the artist who acquires general knowledge about the world rather than opting for specialization. 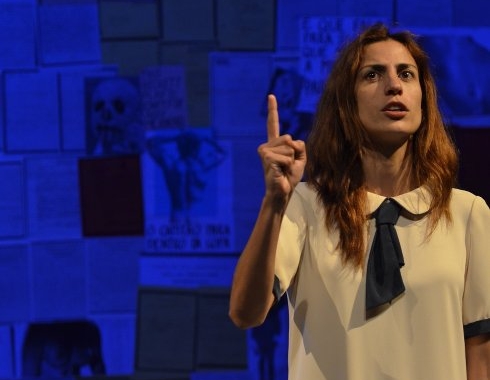 A one-man-ensemble
However, Mundo Perfeito is everything but a solitary enterprise - over the last ten years it has produced just two monologues (STAND UP TRAGEDY in 2006 and YESTDERDAY'S MAN in 2007). It manifests itself explicitly as an open house, in a constant quest for companions in its self-proclaimed ‘battle against the forces of evil’. The result is a string of collaborations with an impressive list of Portuguese and international artists: with the Lebanese Rabi Mroueh and Tony Chakar in YESTERDAY'S MAN (2007), with film director João Canijo, Congolese choreographer and theater maker Faustin Linyekula, American company Nature Theater of Oklahoma, and Rio de Janeiro based Foguetes Maravilha in Estúdios (2008 and 2009); with, among others, Tim Etchells, Alex Cassal, Miguel Castro Caldas, Zé Maria Vieira Mendes, and Jacinto Lucas Pires in HOTEL LUTÉCIA (2010), with other companies like STAN for BERENICE (2005) or Dood Paard for THE JEW (2011), again with Foguetes Maravilha for MUNDO MARAVILHA (2013); with author/musician Jacinto Lucas Pires in INTERPRETAÇÃO (2014), or with Sofia Dias and Vítor Roriz in ANTÓNIO E CLEÓPATRA (2014).

Moreover, the open house gathered a number of regular guests.Over the years, a group of actors took shape that started to make de facto part of the company, even if they maintained the liberty to do other projects outside Mundo Perfeito. The loose ensemble of Cláudia Gaiolas, Tónan Quito, Paula Diogo, Isabel Abreu, Gonçalo Waddington, Pedro Gil and others, is so fundamental, because essentially Mundo Perfeito makes Living Theater: performances that are anchored 200 percent in the here-and-now, far from the conventions of rehearsing (in the French sense of the word, répéter) and reproducing, in the full awareness of the unique encounter, between these actors, this audience, in this space, this night. This implies a big responsibility -and liberty- for the actors who recreate the performance each night.

It is above all a very generous way of making theater, which takes full advantage of the unique power of the medium, and which leads to remarkably accessible performances, without ever being paternalistic or populist. 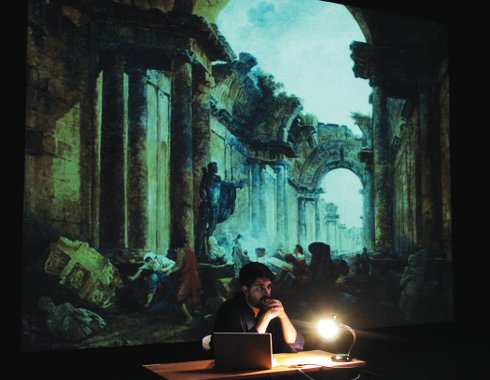 Living theater
There’s another way in which Mundo Perfeito interlaces stage and life. It invites Prime Minister Pedro Passos Coelho, TV anchor João Adelino Faria, (in)famous Portuguese politicians like Marcelo Rebelo de Sousa or Alberto João Jardim directly on stage. It draws a map of Beirut on the walls of the theater. The kitchen of O que se leva desta vida smells stronger and crackles louder than any real life kitchen. Characters and situations that, to their own amazement, find themselves back in a theater hall, more real than real, hyperreal. In Mundo Perfeito’s performances, the metaphorical distance between stage and reality seems, at first sight, almost zero. This is the opposite movement of what happens traditionally in repertoire theater: an ancient Greek, a Shakespeare, Ibsen or Molière is being staged to demonstrate the universality of the human condition, across time and space. With Mundo Perfeito it is not so much a Creon that holds up a mirror of the corruption and blindness of power; rather it is a Prime Minister Pedro Passos Coelho, taking off his shoes and eating a croissant, who becomes Creon. Situations from the anecdotes of the daily newspaper are lifted to a universal level. It is a way of making theater, perhaps kindred to someone like the Hungarian theater maker Bela Pinter, that makes use of very local, date-stamped themes to tell absolutely universal stories.

And even when, in recent years, William Shakespeare or Gustave Flaubert are invited to the party, they’re allocated a place in the audience, to hear their words through the respiration of grandmother Cândida (BY HEART), the bodies and practices of Sofia Dias and Vítor Roriz (ANTÓNIO E CLÉOPATRA), or the argumentations of the lawyers of the famous 1857 trial (BOVARY).

Fiction plays a central role here
Mundo Perfeito makes anything but documentary theater. On the contrary, it drags reality to the stage in a shamelessly manipulated, fictionalized manner, with a strong ‘what if’ quality, in which the imagination has full liberty. There’s something extremely subversive in this power of the imagination, in this claiming of the right to re-dream an entirely new reality, be it with the same ingredients as the old one. It’s closely related to the childlike, provocative naivety of the Dadaists (you just have to look at the name of the company), of a Kurt Schwitters who would state: we demand the immediate abolition of all abuses in the world.

Speaking of the world: strikingly, Mundo Perfeito, with its performances that depart from very specific, local themes, is by far the Portuguese theater company with the widest international visibility. It says a lot about the need for authenticity and identity in theater, and about the misunderstanding of the so-called universal Euro theater. But the prosperous international life of Mundo Perfeito is also a clear sign of the unique way in which the organization functions: it is an organic entity, very distant from the almost martial conventional theater company, with its artistic generals, its corpses of business managers, production offices and communication specialists, its troops of actors and technicians. At Mundo Perfeito the kitchen table and technical booth, the bathroom and dressing room are seamlessly connected. They don’t need a lot of meetings to get things organized. Tiago has compared it to the ‘small local business, the grocery store at the corner, where the human, the authentic and the honest set the tone, where we know where things come from and where they go’. But you might just as well call it a guerilla company, highly maneuverable, traveling light, the distance between the ranks reduced to the minimum. A structure completely in line with the needs of the artistic project.

Eleven years of Mundo Perfeito
It is a warehouse full of sets. A bookshelf with scripts, lines marked in fluorescent felt. A journey at the speed of a roller coaster, of challenges, driven by the hunger to discover new territories, to overcome limitations. And there’s still a whole world out there, waiting for perfection.

When I wrote these paragraphs a little over a year ago, nothing could foresee that the Lisbon earth would tremble again at the end of 2014, but in a very different way than it did in 1755: Tiago Rodrigues was nominated the new director of the National Theater (in popular Portuguese: Teatro Nacional Dona Maria Segunda). The kitchen table and bathroom of Mundo Perfeito moved to a golden palace. Only time will tell if this is a classic tale of the periphery being assimilated by the center, or in political terms, a schoolbook example of Marcuse’s repressive tolerance. But within the logic of Mundo Perfeito (and of a South European subcontinent pressured to redefine itself) it might as well be an indication that the center of the earth has shifted. That some laws of nature have to be urgently revised.