My Other Life
Mein anderes Leben

Matthias or Maren, Helene or Hubert, Ben or Emma. First names are given at birth. Once it has been registered the name remains with us for a lifetime. But what part does the name play in our lives? Does it shape us or do we fill it with meaning? How would it feel to be someone else and live with a different name? In his latest project, the Swiss artist, Mats Staub, asks about names. He invites Festival visitors to enter a small video box and will present his recordings in an installation at a later date. The video box will be located in the Kassenfoyer of the Schauspielhaus from 02. to 06.07, and in the Foyer of the Kulturzentrum Pavillon from 04. to 06.07.

In the past few years, Mats Staub, who transforms answers to standard life questions into unusual art projects, has appeared at Theaterformen with different projects. In 2014 he asked about the ten most important events of a life, in 2013 he presented 21, a touching gallery of biographies of the 20th and 21st century.

Click on the page link below to 'Watch the trailer' - Log-In: formen15

"Tell each other a story"

Mats Staub first came into into contact with Festival Theaterformen fifteen years ago - he was participant in the festival’s fellowship programme at the time. Since, five artistic directors have come and gone. Mats Staub has remained, and over the years a close relationship has developed between the "traveller in causa memory" as he names himself and the festival. Mats Staub has taken us on his memory journeys and sent us out to capture our own memories, for example with TEN MOST IMPORTANT EVENTS IN MY LIFE or the circumstances surrounding the 21st birthday – the moment in which one used to legally enter adulthood. Before Mats Staub sets off again and alights at the station in Hanover with his newest project MY OTHER LIFE in his suitcase, we had the opportunity to ask the long-standing companion of the festival about his Theaterformen memories. 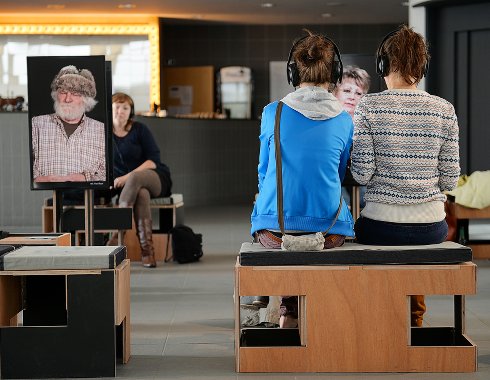 It all began with "Tell each other a story" at the end of June 2000 at the Festival Theaterformen in Braunschweig and Hanover. I was a participant in the summer academy "Moskauer Zeit" and for the first time I had the opportunity to see performances by Alain Platel and Forced Entertainment, and together with Russian theatre students, take part in a workshop given by Jefgeni Grischkowez. "Tell each other a story" was his first task; it made me nervous and perplexed. I was a theatre studies student from Switzerland who wanted to tackle his final paper and had no idea what would happen when he was finished. I thought that in comparison to the Russian students I had nothing of interest to relate. I thought that I did not have a story. But my grandmother had one. So I told them the story of how the professor's daughter from Bern travelled to Africa in the 1930s, and how she fell in love with a Swiss farmer there who had grown up only a few miles from her home but whom she would never have met in her native country. At the time nothing indicated that I would be able to present my first long-term project, MY GRANDPARENTS | MEMORY BUREAU nine years later, in the Cumberlandsche Gallery. At the time I only realised how I thrived in the course of the ten festival days. And now, after fishing out the programmes and notes I made at the time, I again feel the moment in which I composed the two simple sentences on the back of a piece of paper covered in writing: "I am happy. I am alive."

This first encounter with Festival Theaterformen was one of the most important events in my life. This summer, this event marks fifteen years, but also this summer it will continue to be part of my present. It will come to life again when I return to the same spaces and same places, and at the same time my new experiences will blend into a new story as so often since. To me this festival has become more of a Lieu de Mémoire, a place of memories, than any other place. In the park between the Großes and Kleines Haus in Braunschweig, or the steps to the Cumberlandsche Gallery in Hanover, memories of first times are stored everywhere; annual rings, overlappings and updatings are everywhere.

Every time I get off the train in Hanover I have to pause on the platform for a moment.I have an appointment, I am expected, we will be discussing the next work steps - but not just yet; first I have an appointment with the past. Since Hanover holds so many memories for me that I never know which one will cross my mind first. I let myself be surprised. I stay where I am, exhale and the moment is already there, the feeling I had at the time, when I could not know that this moment would occur today. I observe how far away the moment appears to be, how deeply it affects me. Then I let it pass, take my suitcase and walk towards the exit. Yet before I arrive in the present an image comes to mind: for the past six years I still see how, from the lower level, the choir of migrants climb up the stairs: the singing faces from NO MAN'S LAND - I can't tell you what they sang in 2009, but it went right through me.

This summer, for the fifth time, I will present a work at the Theaterformen. Since so much was able to develop here, every visit feels promising. It will not only be a reunion with the past, but something new will happen, something I don't even suspect could trigger something in the future. But I know that is possible especially at this festival. An experience here will make me thrive, an encounter will again allow me to say, "I am happy. I am alive."