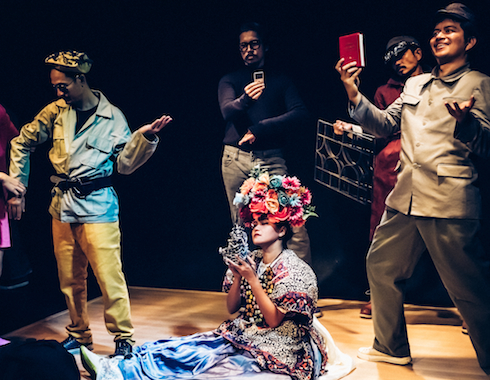 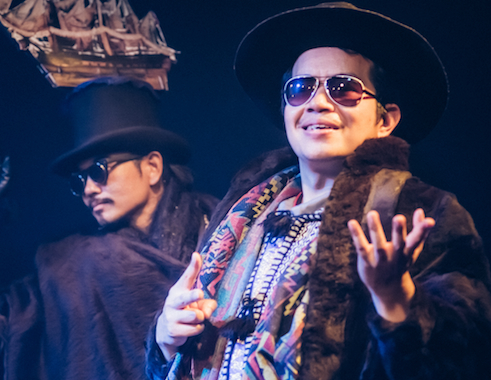 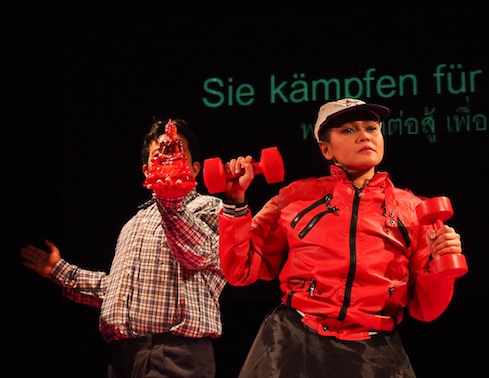 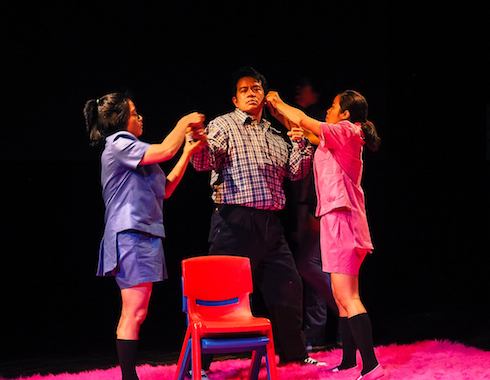 Icons of the 20th and 21st centuries populate the stage in varying combinations: Che Guevara, Mao Tse-tung, Frida Kahlo, Steve Jobs and Aung San Suu Kyi, the resistance fighter from Myanmar. Just like the modern urban species of the hipster, they are images more than people, projection screens and advertising spaces for the ideas that they embody, clearly identifiable thanks to costumes, props and poses. The engagingly smiling service staff encourages the audience to complete these historical figures, pressing the Little Red Book into Mao’s hand, or simply holding it up instead of him. These small gestures reveal power dynamics, establish new rules over and over again, invite you to rebellion. Because the spectator is king – or is it the intrusive service staff – or the hipster after all?

Hipster the King was originally staged one week after the military coup of 22 May 2014 in Bangkok.

In this one of the world’s favourite tourist destinations, it is inevitable that foreign audiences are drawn more towards such “tourist shows” as a lady-boy cabaret Calypso Bangkok (since 1988), cultural performance extravaganzas Phuket Fantasea (since 1998) and Siam Niramit (since 2005), a Korean non-verbal comedy whose context has been adapted into Thai Cookin’ Nanta (since 2013) and a martial arts show Muay Thai Live: The Legend Lives (since 2014). Meanwhile, the Ministry of Culture have been putting more effort into the preservation of classical theatre—the one-evening and one-off presentation of Khon, classical Thai masked dance theatre, at the Royal Albert Hall in London last June, for example. Plus, international festivals have shown more interest towards contemporary Thai works which are based on performing arts traditions.

However, these differ greatly from contemporary theatre works which are being staged almost every week in the Thailand capital where locals prefer restaurants without wooden elephant figurines and traditional music instruments and many enjoy such Thai dishes as “American fried rice”, of which tomato sauce and sausages are main ingredients, and “Phad Thai diet”, in which papaya strips substitute for noodles. 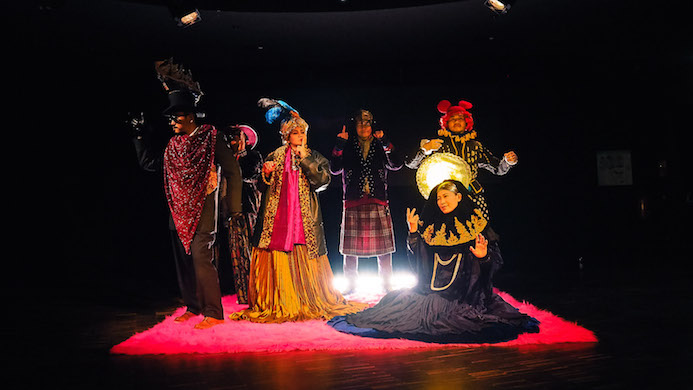 In the early 2000s, professional theatre companies, led by the ones with long history like Makhampom and Crescent Moon, formed Bangkok Theatre Network (BTN) and the country’s first annual showcase of contemporary theatre known as Bangkok Theatre Festival (BTF). Regarding the lack of rehearsal and performance space as a major problem, BTN members, such as 8X8 Theatre, started turning shophouses and office spaces into their studios. After the lease of their 8X8 Corner expired, in 2009 members of 8X8 Theatre rented a two-unit shophouse with a photography studio, whose size is coincidentally 8 by 8 metres, into a black box namely Democrazy Studio, with flexible seating capacity from 45 to 65 audiences. Besides its political innuendo, the name suggests that any performing arts companies or artists, of any disciplines, are welcomed to stage their works here. During the period when Thailand’s political turmoil frequently made headlines in international media, theatre remained the least censored medium and this small performing arts space was a venue where artists could exercise their freedom of speech, notwithstanding the smaller number of audiences and less impact on the society.

Apart from inviting certain artists or companies to work on new Thai plays in the “Demo Homemade” series, and on translation or adaptation of foreign classics in “Demo Classics” series, Democrazy has co-produced, with professional companies as well as independent artists, a wide variety of works from middle- to high-brows including physical theatre and contemporary dance.

In the past few years, it’s not only their quantity but also quality that’s dominant. In early 2014, for example, at the annual dance and theatre award ceremony by the International Association of Theatre Critics’ (IATC) Thailand Centre, Democrazy’s original new play Chuichai Saneha picked up best play, performance by a male artist, original script and direction awards, while their co-production with TV Munk Pisat Hua To was acclaimed best book for musical. Last February, Democrazy Studio’s co-production with New Theatre Society In Ther View: A Documentary Theatre was lauded as best play and Hipster the King was championed as best movement-based performance, direction and original script.

Amitha Amranand, a founding member of IATC Thailand Centre, wrote in her review for English-language daily newspaper Bangkok Post, “Through this unusual performance, Thanapol gives us a live construction of propaganda. The visual presentation of these figures begins as vague images of great humans; we can only put adjectives to them.”

She adds, “In these forms, none of them are wholly humans, but rather carefully constructed images. Their aura and power are amplified by the words from an invisible authority, and the audience’s responses to them—none of which come of our own free will, but rather through suggestions, subtle manipulation, commands, and even coercion.”

Amranand concluded that Hipster the King “forces us to question our responses to messages of greatness and goodness” and “to question the love we believe is our natural human reaction to the so-called mighty and benevolent of the world.”

And given Thailand’s unique type of democracy called “constitutional monarchy”, it’s up to each individual audience member’s political inclination who else one would include into this cast of characters.

Reviewing its international premiere at Offene Welt last year, I wrote in another English-language daily The Nation, “As the surtitles kept repeating that these icons are doing everything for us and that we should get up and applaud them with love and appreciation, I couldn’t help thinking of what has been happening in Thai politics since the turn of the century. Without a curtain call but with six actors relaxing in their T-shirts and shorts after the 75-minute physically demanding performance which also required them to put on many layers of costumes, it’s a strong reminder of the fact that it’s actually us, and our fascination of them, that created these leaders in the first place, and a harsh question whether we actually appreciate who they are or what they do.” 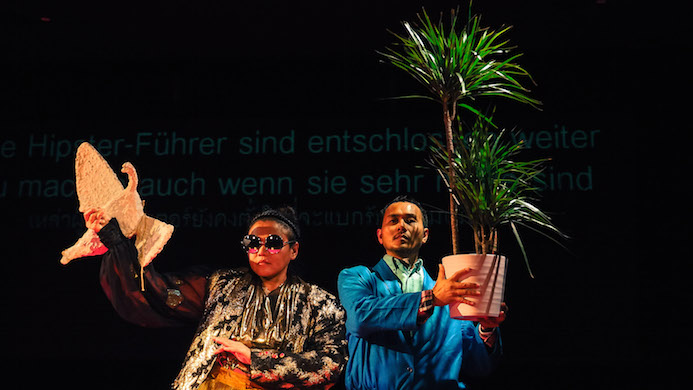 Among the audience in Ludwigshafen was German dramaturg Sarah Israel who described Hipster the King as “a very intelligent, beautiful and playful work being presented in a very choreographic way.”

“It reflects how time pushes something to a certain limit and questions the relationship between the performers and the audience who needs to ask themselves ‘Will I have to get up and clap my hands?’ or ‘What does the show actually want from me, and vice versa?’ It pushes the audience to a point of reflection. I realised that when I got up and clapped, I wasn’t just participating in a performance, but also a political act.”

Evidently, Democrazy Studio is a hub of contemporary Thai theatre, and Hipster the King a prime example of what Thai artists are creating and Thai audience watching.

Pawit Mahasarinand is the first president of the Thailand Centre of International Association of Theatre Critics (IATC).