According to Malaysian legends, tigers embody the souls of our ancestors. Shamans can change into them, but conversely tigers also have the ability to take on the form of a human being for a short amount of time. The colonisation of the Malay Peninsula in the 19th century, and the threats to the forest that accompanied it, almost led to the extinction of these animals, but the tiger remained alive in a multitude of incarnations – for example in the form of the Japanese army, which conquered the British colony in just 70 days under General Tomoyuki Yamashita (the “tiger of Malaya”), or of the fighters of the Malayan Communist Party, which then organised an acrimonious guerrilla war against the Japanese.

Shadow theatre, screens, radios, water tanks and miniature stages peopled with actors come together to form a gigantic, lively collapsible altar. Ho Tzu Nyen interweaves myths and history, animals and human beings, past and future into an unsettling multi-media séance. And the tiger is just waiting for the right moment to return.

It has been said that the Javanese people do not, after sundown, utter the word macan (tiger) for fear of invoking its presence. Instead, they refer to him as guda, from the Sanskrit word gudha, which means hidden, or secret.

What one cannot know, or does not wish to know, one passes in silence. This is why certain tribal groups in Malaya refer to the tiger only by stretching out their right hands in the shape of a claw. The Gayo of Sumatra call him Mpu uton (grandfather of the forest) or Mpu tempat (grandfather of the place), while the Acehnese refer to him as datok (grandfather or ancestor) or gop (other person, someone; used also for people from another village or place). Yet these aliases tell us something of the tiger’s secret: it is a creature of the forest, it is a being of nature, and it is other to humans—though never completely or radically so. For it is also kin, bound by blood to humans in the distant horizon of an ancestral time, for tigers dispersed across Southeast Asia more than a million years ago, long before the emergence of Homo sapiens. Tigers have always been here, at the origin of our histories. 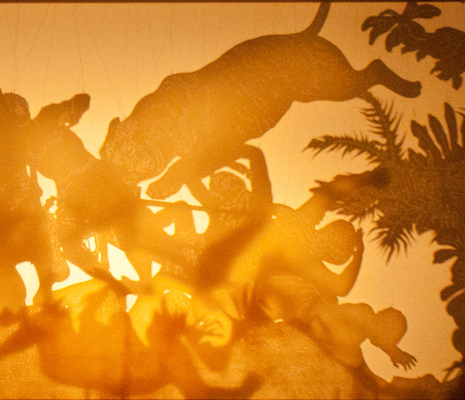 When early human settlers arrived in the region, they favoured as their habitat the transitory zones between the forest and the waters, an ecotone already occupied by other large, ground-dwelling mammals like the deer and the boar—and the tiger that preyed on them. Humans did not yet have the capacity to dominate this savannah-like landscape, for which the tiger was so perfectly adapted. With its paws masterfully designed for stealth, and its eyes attuned to darkness, the tiger, with its striped coat of yellow and black, dissolved into the golden brown fields of the tall lalang grasses, silently stalking its prey from behind, awaiting the perfect moment at which it would bound up and seize the throat. To live in such a terrain, humans had to attune themselves to the ways of the tiger, a process that brings about fusion between the two species.

This traversing of the boundary between nature and culture is especially apparent in the healing rituals of some village shamans: their hands seem to take on the form of tiger claws, or their behavior takes on aspects of a tiger. This is why across Southeast Asia, the tiger was widely believed to live in villages, where the houses have walls of human skin, and the roofs are thatched with human hair. And when crossing lakes and rivers, the tiger can dissolve into the shape of a human.  Should a body of water not be close at hand, the would-be weretiger performs three somersaults, drawing in the air the sign of the swastika – the symbol of water and of cyclical return.

The first written record of the Malayan ‘weretiger’ comes from an early fifteenth-century Chinese source, The Triumphant Visions of the Shores of the Ocean, by Ma Huan, who served as an interpreter to Admiral Zheng He, the great navigator-eunuch of Ming Dynasty China. Of his visit to Malacca, he wrote: “In the town there are tigers which can assume human form; they enter the markets, and walk about, mixing with the populace. If anyone recognized one of these creatures, he would seize it and kill it.” There were ways by which one could discern a weretiger. In its human form, it is believed to lack the philtrum, the cleft on the upper lip, and is a being without a fixed abode: a vagrant, a beggar, or a shaman who traverses the liminal space between nature and civilization. 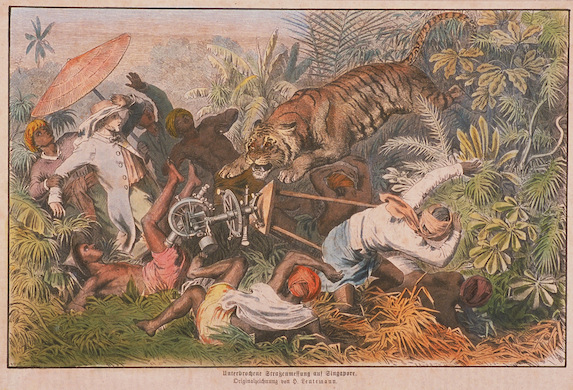 The British colonial rule of Malaya brought about an unprecedented disruption that was at once ecological and cosmological.  Tigers were massacred, and weretigers exiled to the realm of folklore. But like a Leibnizian divine machine, where animal being is a deathless monadic composition that knows only ceaseless reconfiguration, the tiger keeps returning to haunt the region in reconfigured forms. In 1942, the Japanese 25th Army led by Japanese General Tomoyuki Yamashita - known also as the “Tiger of Malaya”, exacted revenge upon the British forces in Malaya.  Moving swiftly through the forest – savage, amphibious and full of guile in a battle – the Japanese forces seem to embody the very qualities that had made the tiger such a feared adversary of the early British settlers.

The principal resistance in Malaya against the Japanese occupation was the Malayan Peoples’ Anti-Japanese Army, a guerilla organization under the leadership of the Malayan Communist Party.  When the Japanese forces surrendered in 1945, the epithet of ‘tiger’ gradually transferred to the Communists, who now constituted a very real threat to the returning British forces which were deflated and weakened by the war. The British eventually responded by intensifying their regulation of forested zones, offering cash bounties, organizing hunts and ambushes – similar strategies previously employed to annihilate the Malayan tigers.  And in the shadows of the dense tropical forest, the British hunters of Communist guerillas sometimes found themselves coming face to face with tigers instead.

To embark upon the trail of the weretiger is to follow through with its line of perpetual metamorphosis – an anthropomorphic, yet non-anthropocentric line that is at once materialist and metaphorical.  And in the myriad entanglements of this metamorphic line, one senses the contours of a shape-shifting region.