The Metamorphoses by the Greek poet Ovid is a collection of 250 myths of transformation. Women and nymphs are hunted by men and gods and transformed into plants, animals, rocks, or water, thereby losing their human voices. This work and other classics in the Western canon can be historically seen as planting the seed of the binarydistinction between human and non-human, as well as culture and nature. Manuela Infante decolonizes these scenes of patriarchal violence and asks the question of why the idea of humanity must be accompanied by aestheticizing the exclusion of and violence against women.

Despite this, Infante is not interested in giving these women their voices back; rather, she criticizes the idea of the human voice as a carrier of political power in the first place. For this, she creates a kind of “noise play” in which these voices are manipulated live on stage. They thus intertwine into uncanny and fleeting, seemingly endless echoes and bodiless ventriloquism until they break down the borders between human and non-human subjects.

Manuela Infante is a playwright, director, screen writer, and musician. She is known for her approach of stagingcomplex theoretical themes and works with various theatrical strategies through which she criticizes concepts of humanity from a postcolonial and gender-specific perspective. Infante regards theater not only as a space where stories can be told; but as an experimental place where philosophy can be explored.

Michael De Cock is a writer, director, and actor. He became the artistic director at the KVS theater in Brussels in 2016–17. Under his leadership, the KVS has built up an ensemble that spans gender, age, and cultures. 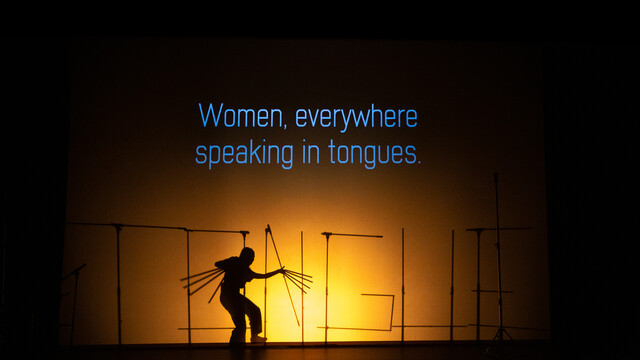 By playing the video data is transmitted to Vimeo. Details can be found in the privacy policy.

Tickets for Friday, July 8 available under the following link: Ticketshop

Tickets for Saturday, July 9 available under the following link: Ticketshop

Bean Bags are available as alternative seating and these can be freely booked as "bean bag seats".