THE OCEAN WILL ALWAYS TRY TO PULL YOU IN 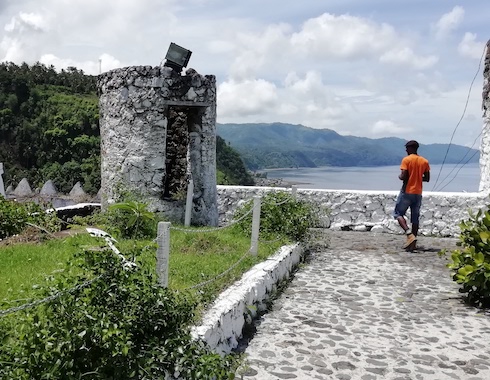 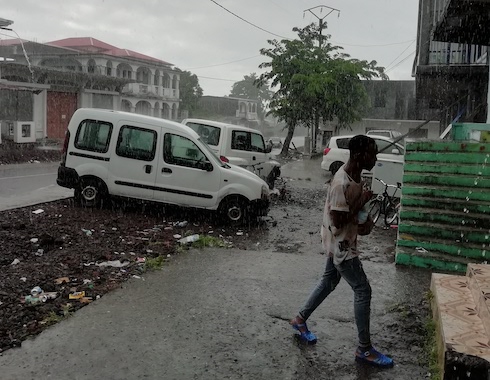 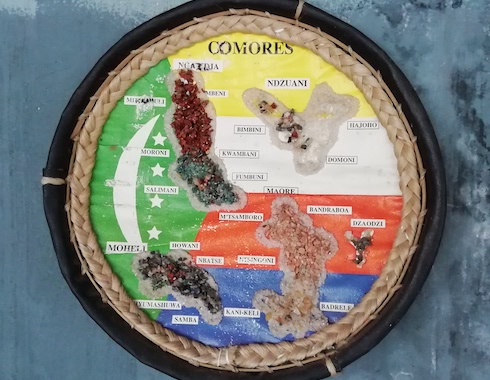 Poetry and truth about the island of Nzwani

In order to investigate a lesser known migration crisis, which began in 1990s and continues up until today, theatre maker and storyteller Ogutu Muraya travels to the island of Nzwani, to the north of Madagascar. Over the years, an estimated 50,000 immigrants have died in their attempt to reach the neighbouring island Mayotte and with it the southernmost part of the EU. In search of the inhumane effects of a political system, Ogutu Muraya comes across the unexpected: the destructive power of the tropical tornado Belna, a crater lake that defies the laws of nature, a geological mystery that links the island with the pre-Jurassic supercontinent Gondwana and a living fossil – the coelacanth, 66 million years old, supposedly extinct until a living specimen was caught in 1938. Ogutu Muraya continues to spin the threads of the stories that he has collected and soon can no longer say himself which are true and which are invented. But the storyteller knows one thing for certain: that the ocean is hungry and lets nothing escape its patient jaws.

For the festival’s special edition A Sea Of Islands, Ogutu Muraya is creating a video artwork based on his original theatre text.

Online conversation The One Thing That Helped
With Ogutu Muraya and Martine Dennewald
THU 02.07. 07.30 PM

We are using the video platform Zoom for the discussions. If you would like to participate, please email us on talks@theaterformen.de You will then be given access to the individual events.

A quest to free my imagination

In late June 2019, this one evening sheltered from a hurricane, I sat at the dining table with papers spread all over the table. The houseboat that I was in, located at the edge where Amsterdam meets Badhoevedorp, rocked with increase vigor battered by the strong winds and heavy rainfall. In this state I snapped. The papers in front of me were part of a periodic game that demanded I prove my value, the quality of my contribution, the status of my wealth, and confirm my good conduct - in short prove that I was not a liability but a productive temporary resident. As long as I engaged, collaborated, and complied with these demands I was promised social mobility in the form of a plastic card that would allow me to move freely within fortress Europe. I snapped because I no longer wanted to prove my value. I snapped because I had allowed this game to overwhelm my imagination. I snapped because I had allowed this game to produce inside me a deep anger, resentment and contempt for my new found status. On that dining table I resolved to cancel my re-application for a Dutch residency permit and return back to Nairobi. On that table a muffled voice inside my head whispered - sleep on it, and if you feel the same tomorrow then you know what you must do. My resolve stayed intact though at times shaken. But in this whole process of exiting the Schengen system I made one error - I announced my decision as a political boycott. This was an error because the decision was not political but spiritual. I left Europe because my imagination had become sour. My expectations had turned bitter blue ruins. I was fast losing the ability to dream. The future with its plural potentiality had become narrow and shallow. While there I was acutely aware that my consciousness was caught up in a dense shrub with thick long thorns. I was stuck inside some kind of blackthorn bush with its flowers in clusters of two or three. Stuck and suspended in its stiff, wide angled branches. In that state of suspension I had one overwhelming desire to free my imagination. To liberate my consciousness from always contemplating and articulating what was wrong. I was fed up with the images reflected back at me, images of structural inequalities, intergenerational trauma, and historical injustices. Surely there must be other patterns, sequences and combinations that did not always position me as a victim.

I made this decision to begin a process of releasing myself from a darkness that was troubled with two of the devil's most compelling hypothesizes – nihilism – if nothing matters then why bother doing anything and suicide - if you can’t be bothered to do anything then why continue to live? The patterns, sequences and combinations that I had adopted in the five years living, studying and working in Europe had led me into a thorny, stuck and sticky situation where I was incapable of becoming the good African diaspora - complying with the system, working twice as hard, sending remittances to uplift my immediate family, instead I had become withdrawn, resentful, anxious and depressed. It was an error to announce my decision as a political boycott. Even if I could persuade myself that it was political – I was also aware that the decision was a solo act, a self - directed action in opposition to a worsening systemic inequality. Such a boycott has no visible effects outside my personal reality - it's not only hubris but has failure embedded within its logic.

To justify this error that portrayed me as a rebel and evade the alternative analysis that confronted me with my mental state, I directed my attention towards the Comoros archipelago with the sincere intention of investigating the migration crisis from the perspective of a non-European context. Although I had initially convinced myself that my intentions were sincere, when I arrived in the Comoros mid-December 2019, the insincerity became apparent. My research there in terms of the facts of the political situation was superficial, lacking substance - shallow. It would be a huge act of intellectual dishonesty to claim that a two week visit has given me sufficient insights to authoritatively talk about the multi - layered complexity that is the migration crisis in the Comoros archipelago. I really wish that this project 'The Ocean is always trying to pull you in' is about the Comoros - but to be perfectly honest it is not about the Comoros. Selfishly, the islands form the background through which I tell my story. It is really about me and my struggles and disillusions.  It is me traveling in the realm of fantasy fiction and magical realism with a very clear quest - to free my imagination.

It is my preference to have visa on arrival as a basic right for everyone, not a privilege for the few, but I have no control over a global practice that predates my existence. It is my preference that structural and systemic inequalities be eliminated but knowing there is such a complex problem does not make the problem go away. It is my preference that colonization never happened but it did happen and I cannot change the past, I can only actively engage my mind to exist the debilitating victim consciousness that this tragic history installed and enter the ecology of consciousness that promotes healing, care and a deep understanding of our basic inseparability to all forms of life. I have my preferences but I must also have the courage to see things as they are. The only way out that I can currently conceptualize is the imagination - this is not a political quest but a spiritual journey with the brief hope that, in that realm I can reorder things a new. The journey to the Comoros may have started with the search to understand systemic cruelty, but it transformed into something mystical. The two weeks of travelling from Nairobi to Moroni, to Mutsamudu, to Sima, to Bimbini, to Mremani, to Domoney, to Dzialandee, to Tsembehou, to Moya and back to Nairobi became part of an epic quest to reconnect with the imaginary, with a sense of wonder. In the words of Rebecca Elson to willfully accept to - ‘honor my responsibility to awe’.